In 2017 Optus announced a strategy to invest >$1b in regional Australia and increased their media spend to match Telstra at ~36% SOV. A goliath move that challenged Telstra’s network superiority and market share.

To combat Optus, Belong was deployed to provide a value alternative to regional Australians.

To provoke regional Australians to switch, they created a bespoke data set to identify market opportunity, addressable audience and channels of purchase influence, a comparative creative message and sustained eSOV.

Win share of market for Belong in Regional Australia

In 2017, Optus announced its strategy to invest over $1b in regional Australia1. In addition to a  major network upgrade, Optus increased its  marketing spend to match Telstra in 2020 and  2021. With improved network  and parity SOV, regional share of market  increased over the proceeding 5 years to lead  Telstra within ‘value’ customer segments.

Belong had not traditionally invested with sustained significance in regional markets and consequentially enjoyed a tiny fragment of SOV or SOM.

The challenge was to take on Optus, using the Belong brand as a value competitor, to win back mobile market share.

As the team explored this key driver of choice, it became clear Belong had a hidden strength, one that mattered less in previously metro-orientated strategies – they run on the Telstra 3G and 4G network: The. Best. Regional. Network. In. Australia.

This was a unique promise they could legitimately make to our regional customers. Mobile coverage claims are a highly litigious issue. The team had to be legally certain they could claim a network advantage.

The lean media budget wasn’t going to stretch far across all regional markets, so the team strategically selected markets where the opportunity was greatest.

To identify these markets, they built a custom  data set by scraping competitor network  footprints and pricing (all publicly available),  first-party market share, and media broadcast  signals, to arrive at our variables of interest.

Using Roy Morgan, 10% of this audience was identified as ‘considering purchasing a new phone plan’ over the coming 6 months which presented a total in market addressable (TAM) audience of XXX’000K people.

Applying the principles of Byron Sharp, the team sought a media derived eSOV increase to 13%, laying the conditions for market share growth.

The team explored how audience behaviour differed by region and the role media channels played in path to purchase. Again, in variation to metro audiences, regional audiences differed in the channels that most significantly influence mobile purchase. For example, in Wollongong television was most influential, while in Bendigo it was newspaper inserts, and in Darwin, radio.

They then built market specific media plans tailoring our message to the channel and deployed with impact throughout the funnel. The superior value advantage meant Belong could compare against Optus – a rarity in telco advertising.

In lower funnel channels the value comparison was expressed through the messaging platform of “get 4x more data than Optus”.

The campaign was flighted in two phases  across four regions each, allowing the team to test and optimise between phases. 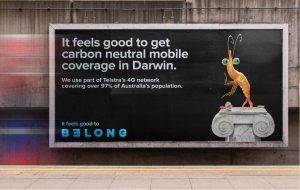 Boomtown can show you how to stretch your media dollars further in regional Australia. Speak to a Boomtown representative today and watch your brand go BOOM!

Keep Up To Date With Boomtown

Don’t miss any of the action.

The Boomtown News is the only industry roundup dedicated to Boomtown and the opportunities for brands to connect powerfully with an extra 9.3 million regional Australians.

Compelling insights, handy tools and resources along with the latest news from Boomtown, straight to your inbox.

Don’t miss any of the action. The Boomtown News is the only industry roundup dedicated to Boomtown and the opportunities for brands to harness 9.1 million extra Aussies.

Compelling insights, handy tools and resources along with the latest news – straight to your inbox.

Don’t miss any of the action. The Boomtown News is the only industry roundup dedicated to Boomtown and the opportunities for brands to harness 9.1 million extra Aussies. Compelling insights, handy tools and resources along with the latest news – straight to your inbox.