Canberrans care deeply about their city, home and environment but were wasteful and disinterested regarding home sanitation. The Free the Poo campaign was created in response to this.

From their research to explore wastewater reliability challenges, Icon Water identified seventeen key issues including wet wipes, period care products, fats, oils and trade waste, which were all contributing to blockages in the wastewater system.

Wet wipes were a particular problem. Although often marketed as ‘flushable’ or ‘biodegradeable’, this is not the case, and instead wet wipes account for a blockage approximately every three days within the ACT network.

The process of clearing the blockages costs the Canberra taxpayers nearly $70,000 each year, and exposes workers to high risks of injury. This also poses a significant cost to the Canberra community.

Given that past programs had failed to resonate, it was clear that a creative and contemporary approach was needed.

To get people to care about the sewerage system, Icon Water endeavoured to ‘make poo interesting’.

After conducting developmental research to identify key insights, Icon Water found Canberrans were generally apathetic about wastewater. Many did not even associate it with Icon Water. Sanitation is an expectation, and the community is disinterested until it impacts their lives. Despite this, Canberrans care deeply and are proud of their city, home and environment.

In response to the research, Icon Water developed ‘Free the Poo’.

‘Free the Poo’ is aimed to educate and influence a change in behaviour around bathroom practices that leave our wastewater network clogged and unhealthy in an attention-grabbing and unexpectedly cheeky way.

Central to stakeholder confidence in the execution of this campaign was the community involvement in its development. Seven focus groups of Canberrans provided feedback on the draft concepts, key messaging and creative advertising. Their feedback strongly influenced design, imagery, messaging order, and the campaign call to action.

The result? An innovative, interesting, attention-grabbing campaign that has now evolved into a multi-year strategy focussing on wastewater literacy and driving positive brand recognition.

Subsequent iterations of this campaign will look to focus on other products that impact and disrupt the wastewater network. 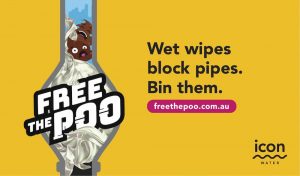 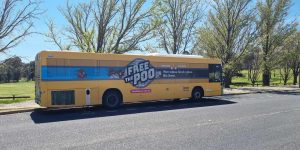 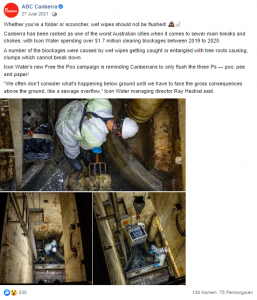 ‘Free the Poo’ become a viral hit within four days of launch, and has led to a jingle and hit video game available on browser, Android and iOS.

Average results since the campaign launch have also shown a 14% improvement in community perception of Icon Water as a Valued Partner.

The campaign and its ability to adapt to online, digital and radio channels helped it not only maintain visibility but achieve double-digit growth.

Boomtown can show you how to stretch your media dollars further in regional Australia. Speak to a Boomtown representative today and watch your brand go BOOM!

Keep Up To Date With Boomtown

Don’t miss any of the action.

The Boomtown News is the only industry roundup dedicated to Boomtown and the opportunities for brands to connect powerfully with an extra 9.3 million regional Australians.

Compelling insights, handy tools and resources along with the latest news from Boomtown, straight to your inbox.

Don’t miss any of the action. The Boomtown News is the only industry roundup dedicated to Boomtown and the opportunities for brands to harness 9.1 million extra Aussies.

Compelling insights, handy tools and resources along with the latest news – straight to your inbox.

Don’t miss any of the action. The Boomtown News is the only industry roundup dedicated to Boomtown and the opportunities for brands to harness 9.1 million extra Aussies. Compelling insights, handy tools and resources along with the latest news – straight to your inbox.